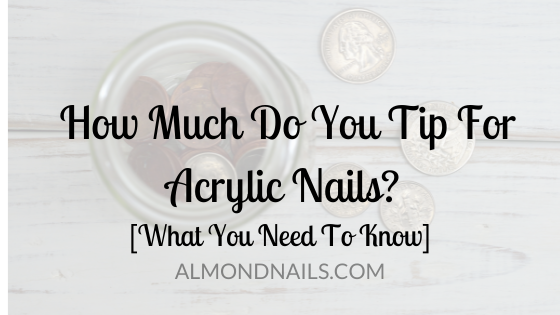 There are few subjects quite as controversial as tipping. For some, skipping the tip is considered the height of rudeness. For others, it’s something they’ve never once had to do and don’t think about at all. And then there is the question of where to tip. Is it just at restaurants? What about places where you might not expect you would need to tip, such as a salon?

If in doubt, you can always ask to be sure.

It may be an awkward conversation, but at least this way, you will not leave with any hard feelings.

And if you plan to go back, it can actually be helpful to know for the long-term.

How can you be sure, and how do you avoid a social faux pas in this instance?

We’ll walk you through the etiquette of tipping at a salon, so you can handle your next encounter with grace.

Should You Tip At A Nail Salon?

In the United States, you should probably tip at the nail salon, either your manicurist or anyone else who may be working on your nails. Outside of the United States, tipping is not likely to be expected. If you’re confused or unsure, ask someone. They’ll appreciate the thought, even if they’re not tipped, employees.

Tipping is one of those things that you’re either very familiar with or not familiar at all with.

That’s because it’s a cultural thing, mostly linked to life in the United States.

There are different minimum wages for tipped employees, and not tipping is considered to be one of the ruder things that you can do in an establishment.

For the rest of the world, this is considered an oddity, to put it lightly.

Other countries don’t have tipping, and tipping someone for a service that they paid for would never occur to them.

So, the answer varies.

However, the questions don’t stop there. Sometimes, certain areas (or even certain businesses) don’t have or even outright forbid tipping.

There are different reasons behind these policies, including paying a higher wage, a stance against tipping culture, or just personal feelings about the practice.

This can make it even trickier to determine who to tip and who you can skip.

Luckily, there are some signs.

First, look for any signs of tip jars, or signs of others leaving tips.

A jar of loose bills and change is almost always a tip jar.

Do the receipts include a tip or gratuity section?

And are other people handing out cash before they leave the salon?

There’s one more solution to your conundrum: just ask.

You might feel a bit silly doing so, but asking if you can tip your manicurist is the simplest way to get a straightforward answer.

And you can be sure that, even if they aren’t expecting a tip, they’ll be happy that you thought of them enough to ask.

How Much Should You Tip For Acrylic Nails?

Figuring out the tipping process can feel like a math class if you’re not used to tipping in your normal life.

Even if you do tip, you might find yourself pulling up a calculator app more often than you would like to admit.

But it doesn’t have to be that hard!

Generally, you can expect to tip anywhere from $5.25-$7 for a standard set of acrylic nails that cost $35.

Of course, that price will go up as the cost of your nails do.

You may prefer to tip more for higher-quality work or an exceptionally good manicurist.

Alternatively, you may tip less if the work was sub-par or the manicurist rude.

Don’t tip less than $2, as that might be considered rude.

No matter how cheap, have a couple of bucks ready to stick in a tip jar.

This is probably quite a shock to those who haven’t tipped before.

And, if you’re not great and doing percentages in your head, it could seem more like math homework than normal commerce.

That can be a problem, but there are workarounds.

Tip calculator apps are indispensable for those who get confused by percentages.

There are many free versions available, so take advantage of that!

You can also do the math on your phone’s standard calculator.

To help out, some places are willing to charge a gratuity of a certain percent directly to your credit or debit card if that is how you’re paying.

They’re usually perfectly happy to, and the register makes it easier to figure out than if you were using your phone’s calculator.

Or, even worse, a piece of paper and a pen!

Can’t nail down the right answer?

Always tip at the upper end, unless your service has given you a good reason not to.

It’s better to pay too much than too little.

Either way, a bit of math isn’t a lot when you’re getting beautiful nails.

When Should You Not Tip At A Nail Salon

You shouldn’t tip if it’s not allowed in the business, if the person is uncomfortable receiving a tip from you, or if the service has been very poor.

Of course, as with anything, there are exceptions to the “always tip” rule.

Even in the US, where it’s considered to be bad manners not to tip, there are places that don’t allow it.

This might be because of the business’s political stance on tipping, or because it makes taxes and payroll easier.

If a business doesn’t allow tipping, don’t try to press it: a manicurist may lose their job if they break this rule, and you certainly don’t want that!

A $6 tip isn’t worth an entire career.

You might also run into someone who is allowed to accept a tip but feels uncomfortable in receiving one.

There are many reasons this might be true, but you shouldn’t need to hear them. If they don’t want a tip, don’t force it.

Lastly, you might choose not to tip because the quality of the service wasn’t what you expected.

Or, the staff was rude, neglectful, or just generally unpleasant.

You should only not tip in this situation if the person you’re tipping could have made a difference.

For example, your manicurist wouldn’t be able to stop a loud argument between customers from interrupting your relaxation.

However, they could keep from rambling about unprofessional things or becoming argumentative themselves.

Use your judgment here.

Is It Bad To Not Tip At A Nail Salon?

For most places inside the United States? Yes, it is considered rude to not tip your manicurist. There are, of course, exceptions to that rule, particularly in more liberal parts of the country. It’s better to always assume tips are expected in the US. In other countries, it’s less likely to be required. Asking is always better than being wrong.

So, we know how much a tip should be for acrylic nails and that some places allow tipping while others don’t. The real question is, would it be bad to skip out?

It can be tempting to leave out a tip, particularly if it adds $10 to your final bill.

It could seem like an easy way to save money while getting your nails done.

The answer, for most of the United States, is simple: yes, it is bad.

You’ll be looked down on as rude if you intentionally skip out on giving a tip for the service that was provided.

The only time that is acceptable is if the service was truly awful, and you have no intention of ever using that manicurist again.

If you’re skipping out to save money, then you should probably go for a cheaper set of nails instead of not giving a tip to someone who deserves it.

Getting your nails done in other countries can make the question more difficult.

You’ll likely not be expected to tip there, but, as with the US, you might find a salon that is the exception to the rule.

It is far less likely that the pay will depend on the tip as it does in the States, though, so you’re probably not going to hurt someone’s bottom line.

As mentioned above, you can look for tip jars or other signs that gratuities are allowed in that particular salon.

Remember: it’s far less embarrassing to ask if you should tip than to make the wrong decision about tipping.

You’ll come across as thoughtful, even if the answer is no.

Between 15-20% – that’s how much you should tip for your acrylic nails if you do so.

But as we have seen, there is a lot more that goes into tipping than you might have initially thought.

Considering where you are, local customs and traditions, along with your level of service, are perhaps the main things to consider here.

Wondering how much other manicures cost and if you need to tip, the following guide may be of help: