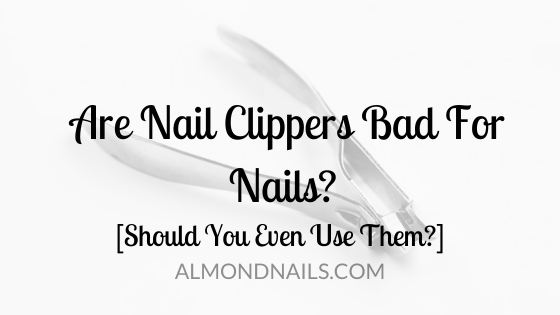 Nail clippers. They’re an effortless and simple way to trim your nails. After all, they come included with many manicure sets and are often recommended. But can they cause damage to nails? Are they safe to use and use regularly? Here is what you ought to know.

So, are nail clippers bad for nails? When misused, nail clippers can cause cracking in your nails, leading to splits and peeling. Clipping is generally a rougher method than using a file. However, if used correctly and not too regularly, nail clippers should not cause any long-term or permanent damage.

There’s a reason why nail clippers are so popular.

And for the most part, you’ll be pleased to hear that they are generally safe to use.

They’re probably not going to hurt you.

That’s assuming you have a good pair and use them correctly.

But this is not always the case.

Let us now explore how damaging this particular tool can be and how to ensure your nails stay safe when trimming them down!

It is possible for nail clippers to damage your nails. The shorter your nails are and the weaker they are, the more likely that this will happen. If your nails aren’t long and healthy, then you should use a file instead. Otherwise, you can clip, but with caution.

What’s the worse that could happen, right?

You have to keep your nails a manageable length, after all.

And it’s by far the fastest way to get the job done, and certainly better than idly chewing them off or having them break.

But don’t reach for the clippers just yet!

If your nails happen to be short or not in the best shape, then you could be doing some damage to them with the clippers.

Because of how the clippers cut, your nails may have tiny cracks and splits in them after every use.

If you’re already dealing with nail problems, this can compound them, leading to more splitting, more cracks, and more peeling.

You also run the risk of clipping them too short if they’re short as-is.

Instead, filing them is the better solution in these cases.

Are your nails in good condition?

Are there no splits, cracks, or peeling areas to worry about?

Then you can probably feel safe in clipping the new growth away.

Just be sure that you don’t overdo it or do it too often: once a week should be plenty.

The more you clip your nails, the more likely it is that you’ll damage them.

Avoid that by scheduling your clippings.

Need some length taken off in between?

Break out your file; it’s the more gentle option, and you can use it more often without damage.

It also helps to be sure that you’re using the tools in your nail-care arsenal correctly.

Misusing a tool, or using it too often, can cause as much damage as using the wrong tool in the first place.

Read on for more information about the proper uses of nail clippers and files!

Is It Better To Clip Or File Nails?

Almost always, the healthier option for your nails is to file them. However, you can clip on occasion, as long as your nails are healthy enough for it.

When it comes right down to your nail’s health and looks, then there’s a clear winner: filing.

It’s the more gentle way to keep your nails short enough to work with since it removes the layers a bit at a time in smooth strokes.

The higher grit the file is, the more gentle it will be.

At the same time, the higher the grit, the less it will remove in one pass.

Because of this, filing, while being healthier, is also much more time-consuming than the alternative.

This is why so many people prefer clipping their nails to filing them.

In a rush, or want a lot of nails removed quickly? Then nail clippers are your best bet.

While rougher on the keratin, potentially damaging the nail itself, it’s fast enough that nails can be clipped in only a few minutes.

Compared to filing, which can take upwards of 200 strokes with an emery board, that’s no time at all.

If you’re too busy to sit down for long, then it’s obvious which one you’ll choose.

If you can’t wait for an entire filing, you don’t have to worry about clipping.

For most people, the damage won’t be bad or even noticeable.

Clipping once a week is enough to keep your length in check without hurting your nails.

But, for people with previously damaged nails or short nails, it should be skipped.

What Is The Best Way To Clip And File Nails?

Clipping should only be done once a week. Never clip your nails in a straight line. Instead, make three or more curved clips and smooth them with a file. To file away new growth, you will need approximately 20 strokes per nail for a total of 200 strokes to remove a week of new growth from all of your fingernails.

So, now that you know that clipping and filing are way more complicated than you ever imagined, how do you go about doing it in a way that won’t ruin your nails?

Follow these suggestions, and you’ll be able to trim your nails and keep them looking great!

Before clipping, make sure that your fingernails haven’t gotten wet in the last hour.

Wet nails are more likely to peel after being clipped.

Also know how you plan to clip them.

This isn’t something to wing; have a look in mind. Always start with sharp clippers, not dull ones.

Clip just above where you want your final tip to be; aim for a little longer than you’re imagining.

We’ll be finishing off with a file, anyway.

One on either side, then one in the middle, joining them.

You’re going for curved, not straight.

Straight is actually more difficult since it’s not the natural shape of your nail.

Smooth the rough edges with a file, and get it down to where you want it to be. Done!

For a week of new growth, expect 20 strokes.

And that’s if your nails don’t naturally grow fast.

Only clip your nails once a month?

Startup Netflix; it’s probably going to be a while.

Try to keep the strokes in the same direction to keep peeling and splits from happening.

Then, just try to persevere until you’re done.

It’s arduous but worth it!

How Often Should Nail Clippers Be Replaced

It depends on the quality of the nail clippers. Cheap ones can have less than five uses before you have to toss them. More expensive ones might never need to be thrown away. Generally, once your nail clippers are no longer sharp, you should replace them.

If you’ve had a fungal infection or other foot infection, you might want to replace them just to be safe.

Just like toothbrushes, most nail clippers will have to be replaced every once in a while.

Of course, it’s not as straightforward as you’d hope.

There is no guaranteed “use-by” date that you can look at to know when it’s time to throw away your clippers.

You have to do a little deductive reasoning of your own.

First, consider the quality of the clippers. Are they the cheap kind that you get with cheap manicure sets?

If so, they’ll probably be used up before the cheap nail polish that likely came with it.

Three or four uses is sometimes their entire life span.

The sure sign that you need a new pair of clippers?

The blades have gone dull.

Dull blades are more likely to cause cracking and split so, no matter how expensive or high-quality your nail clippers are, if the blades are dull, it’s time for a new pair.

You may also consider replacing them after you’ve recovered from a fungal infection or other medical problem with your feet.

It can help keep you from reinfecting yourself and is just a good idea hygienically.

For clippers or other tools that are expensive, you should at least be sure to thoroughly sanitize them before using them again.

And when it comes to getting a new pair, be sure to compare your options.

Heading to Amazon and taking a look there can get you a great, high-quality pair for a great price!

Nail clippers can damage your nails.

Can being the critical word here.

For the most part, so long as they are used carefully and appropriately, they should not cause any issues.

But depending on the length and health of your nails and the state of the clippers, they can be very damaging.

It ultimately comes down to context.

But filing, while it may be more effort and take longer, is generally the safest option for everyone.