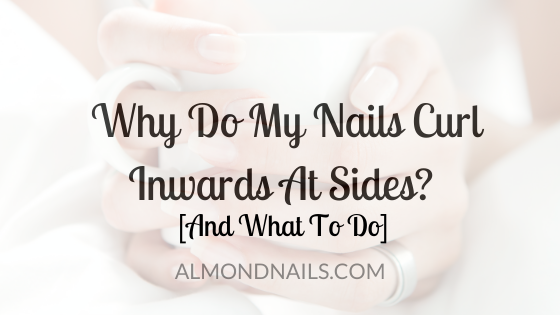 Beautiful, strong, healthy nails are something to strive for. But sometimes, your nails do not match what you expect to see. Curving inward is one such example. What is it, why does it happen, and what can you do about it? Here is what you need to know.

It’s only natural to question why this happens.

Especially if you have only just noticed it, or it appears on one nail.

Besides, you may want to have acrylics or gel nails and maybe even be worried that they are no longer possible.

Try not to worry; it is more common than you think.

This article here today will be helping you to identify the cause and propose some solutions.

Why Do My Nails Curl Down On One Side?

There are many reasons that your nail might curve on only one side. Injury is a likely cause, as is vitamin deficiency. However, it might also be something more serious, such as respiratory issues.

Are your nails doing the wave? One side of your nail curving down can see a frustrating sight while the other is relatively normal.

The asymmetry can be more jarring than the actual curling itself.

But there are a few reasons why you might find yourself with unevenly-curled nails.

The first question to ask yourself is if you’ve ever injured the nail or fingertip that is curling.

Sometimes, a damaged nail will not grow back in the same way that it did before.

People have reported curling to one side after trauma or injury to the appendage.

If this isn’t a sudden change in your nails, try to ask someone who knew you as a child, even a baby.

You might not even remember the accident that damaged your nail in the first place!

If an injury is ruled out, you might want to start considering popping some vitamins.

A vitamin deficiency (particularly in vitamins B and C, along with protein and calcium) can cause your nails to become unhealthy, weak, and brittle.

This can lead to curling at the sides and breakage.

Nails that are continually breaking and peeling are usually signs of nutritional deficiencies, so definitely investigate here first.

Speak with a professional or a doctor, and they will be able to run some tests and even advised what you may be low or lacking in.

Lastly, there is the nuclear possibility: respiratory problems.

A lack of oxygen in your blood can lead to what is called “nail clubbing.”

More obvious side effects are noticed with this problem, such as the nails becoming enlarged at the ends, not tapered.

This happens typically symmetrically, but sometimes one side is more prominent than the other.

This is more likely to happen in someone with asthma and other lung diseases.

However, it can also be a sign of other disorders, such as cardiovascular disease, IBD, and AIDS.

Are you a smoker? Quitting might help your nails recover.

If you suspect a medical condition is behind your curling nails, you should consult a medical professional.

Why Do Fingernails Curl When They Get Long?

As nails grow longer, they often begin to dry out. Because of that, the ends start to curl into themselves.

Growing out your nails naturally can be a long, arduous process.

But it can be well worth it if that means never having to pay for fake nails again!

Unfortunately, one thing can have you breaking out the nail clippers and files faster than anything else: Curling.

As nails get longer, many find that the traditional c-shaped curve of the nail slowly gets smaller until it’s more of an o-shape.

For anyone who doesn’t want to look like they’re wearing Bugles on their fingertips, this can be awful.

Why does it happen?

The most common reason is simple drying out.

As nails get longer, the keratin that they’re made of becomes drier and drier.

This can cause traditional, tight curling, along with breakages and brittle nails.

You can check if this is the case by soaking your nails in warm water for a while or perhaps examine them after a shower.

If they look healthier, this is likely your problem.

There are ways to contend with dried nails.

Keeping them moisturized is a great way to stop them from curling or breaking.

Products come as oils, pastes, and even solutions that go on, like nail polish.

If you’re trying to grow out your nails, the chances are that you already have some cuticle oil lying around.

At the very least, you probably know what it is.

Here is my favorite brand that you can pick up for an amazing price!

No nail products in your arsenal? Don’t worry!

Anything that provides moisture and locks it into place will work.

Aquaphor is an another great solution that you might already have.

Even ol’ fashioned Vaseline can help!

If at all possible, look for something that includes Vitamin E or biotin, both of which can help produce healthy, beautiful nails.

Why Do My Nails Curl Up At The Ends?

Nails that curl upwards at the ends usually are something called “spoon nails.” This can be a sign of iron deficiency.

If your nails are curved in a way that makes them look like they belong opposite the salad fork, you probably have spoon nails or koilonychia.

While sometimes occurring naturally in infants, it might be a bit of a problem for those who have them out of the highchair.

In fact, they can be a clear sign that you should head to your doctor for a shot of Vitamin B12 and some iron tablets.

This can come from anything that causes your body not to absorb and metabolize iron properly.

Conditions such as anemia are particularly likely causes.

There’s another thing to keep in mind: this typically only happens when the condition is a chronic one.

A brief amount of time with low iron probably hasn’t caused this.

Suppose you’re a sufferer of an illness that causes an iron deficiency.

In that case, it’s a good idea to update your health care provider about what’s happening to your nails.

If you don’t have a diagnosis, it’s not a good idea to diagnose yourself.

Instead, it would be best if you headed to your primary care physician for some tests.

Do you know you’re low on iron?

Changing up your diet can help. Try to eat foods rich in iron, such as tuna and spinach.

Or buy a cast iron pan, and cook some tomatoes in it!

You’ll be upping your daily iron intake with nothing but your cooking implements.

How Do I Stop My Nails From Curling Inwards?

There isn’t anything that you can do to stop inward curving permanently. But, with some tools and creative shaping, you can temporarily relieve the curling.

It’s not a very helpful answer, but it is the truth.

For some people, their nails naturally curve inwards at the sides.

But that doesn’t mean that there isn’t any hope for you!

For days when your nails absolutely must be perfect, you can put a little extra effort in exchange for some beneficial results.

First, you should make sure that your nails are strong.

Taking a supplement that includes biotin can help with that.

Moisturizing is also a must since weak nails tend to lack the support to keep from curving.

As mentioned above, cuticle oil or even just Vaseline will work.

If they’re dehydrated, a soak in a warm oil of your choice can help seal in the moisture.

Give your nails as much love and protection as you can.

Still having problems? Now it’s time to turn to shaping.

You’ll need some tools here: clippers, a variety of files, manicure scissors, and anything else you would normally need for nail shaping.

Filing down the ends and shaping them to be less rounded can sometimes help offset the curl at the sides.

Trimming up from the curved edge to the nail’s tip at a bit of an angle can also make the curve look less severe.

Once you’ve softened the curl a little, use a more gentle file to round things out until it looks natural.

Can I Cover My Curved Nails With Acrylics?

Depending on the kind of curl, wearing acrylics might be possible. But, with spoon nails or dramatically curved nails, it can cause infection.

If you don’t have great nails, you might be considering what many others do: get fake nails.

Acrylic nails are popular for many reasons, so it makes sense that someone with oddly-shaped nails would want them.

What’s the worst that could happen, right?

Unfortunately, you might not be thinking of the actual worst-case scenario.

If your nails bend in such a way that acrylics would leave a gap (particularly common with spoon nails), then I have bad news: you should probably skip the acrylics.

The little beasties can live and grow comfortably there.

For nails that are possibly already unhealthy, this can be disastrous.

If this is your case, say no to fakes.

But what about if your nails aren’t so dramatically curled that they leave a gap?

You should be cautious, but it might be possible to get acrylics put on safely.

Use your best judgment, and talk to the experts for more personalized advice.