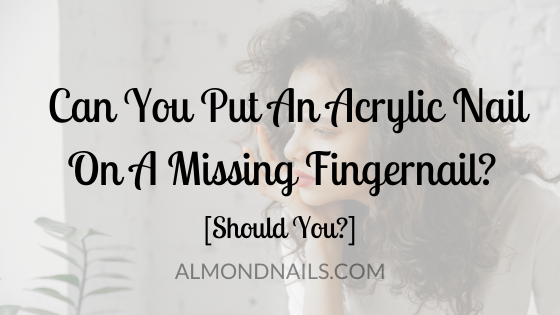 When you have a missing fingernail, it’s easy to be self-conscious. It might be tempting to use acrylic to fake it until your nail has grown back. Plenty of women seek out this very solution. But is it really viable? Should you even do it? Here is what you need to know.

So, can you put an acrylic on a missing fingernail? You can get an acrylic nail on a missing nail, so long as there is enough nail left to build off of. However, this does not necessarily mean that you should. In fact, it comes strongly advised not to. Doing so will put you at increased risk of infections and other nail disorders long term.

I know you may want acrylics.

And the thought of a lost exposed nail is not ideal.

After all, it’s not like a toenail, that can be hidden away in closed-toe shoes – your hands are always on display.

If you normally wear nail polish, it becomes even more noticeable.

And there’s always the nightmare scenario of having it happen around a big event, like a wedding or a big date. What’s a girl to do?

However, there are many reasons why this isn’t a good idea.

Here, we’ll be delving into the issues surrounding acrylic and other nail replacements. And why they’re not great when you’re missing a nail.

We’ll also be talking about the best thing you can do. So be sure you stick around.

The longevity and health of your future nail depend on it.

Can You Get An Acrylic Nail On A Missing Fingernail?

You could, and it will probably look fairly similar to your natural nail. And there doesn’t not need to be a lot of natural nail left to do so. That being said, it’s going to be very hard to find a reputable professional to do so, though, because it comes with significant risk.

There are many problems, some quite serious, that come along with getting acrylics on a missing nail.

Infection is the most likely, and it can lead to such high-stakes consequences.

In extreme cases, if an infection was to develop and not to be treated, it could even result in amputation!

Is a missing fingernail really so bad?

It isn’t just acrylics that are the problem here.

Gels, PolyGels, and other falsies that are applied directly to your nail bed can have the same consequences.

Even just a drugstore-bought fake nail can cause problems.

If you want the best nails long-term, you will need to avoid fake nails until the missing ones have grown back.

It might take some time, but it’s the surest way of restoring them back to their healthy state.

Should You Put An Acrylic On A Missing Fingernail?

While it’s possible to get an acrylic on a missing nail, it’s not something that you should do. This is the same for other types of artificial nails, such as gels. It’s best to leave your nail bed exposed or covered with a bandage.

It might seem like a harmless cover-up until you’re back to normal, but it could have far-reaching consequences.

It’s simply not worth the risk, just to look a bit prettier until your nail has grown back.

The top consequence to worry about is infection.

Any time you use fake nails of any sort, you run the risk of infection.

That’s because the spaces between the nail bed, the nail, and the falsie are all prime breeding grounds for bacteria.

It’s harder to keep a fake nail clean than it is to keep your natural nail clean, making falsies more infection-prone.

When you put a fake nail directly on top of an exposed nail bed, the problem gets worse.

And an infection there might mean more than just a foot fungus and some cream.

Infections of the nail bed can cause your nails to grow back differently than before, often in ways that are not flattering.

In some rare instances, the nails don’t grow back at all!

Then there’s the theoretical concern that’s likely to really get your attention: amputation.

It’s within the realm of possibility that if an infection grows out of control, you might not just lose your fingernails but your entire fingers.

Do I need to tell you it’s not worth it?!

How Do You Cover Up A Lost Fingernail?

A bandage is the best way, though certainly not the prettiest. Trimming and painting a bandage to look more like a nail will be less noticeable. For times when looks are important, you can paint over the exposed nail bed (using non-toxic nail polish) or use a fingernail wrap, preferably one of the cloth kinds.

Of course, there are ways besides acrylics to cover up a missing nail.

These are all better options and less likely to cause serious side-effects, like those mentioned above.

The most popular, cleanest, and likely best way? Grab a Band-Aid!

A bandage will protect your exposed nail bed, keeping it free from further damage and protecting it from those nasty germs that might cause an infection.

Keep it changed regularly, and you shouldn’t have an issue.

There are many pretty bandage options if you don’t like the beige monstrosities most people use or if you feel like going a bit out-there for fashion points.

And, if you want to fake a nail-like look, you can use them!

Trim the bandage (making sure it has enough adhesive to stick) into a nail shape, and stick it on.

Cover it with a similar paint job to your other nails.

It won’t have a long, pretty look, but it’ll look less noticeable than a completely missing nail.

Don’t have a Band-Aid? No problem!

You can fake having a nail with just a bit of polish, too.

Simply paint over the nail bed with opaque nail polish as though the nail were there.

You shouldn’t make this your daily solution, and you should always use the gentlest nail polish available.

When it’s time to remove, use a non-acetone remover and remember to be gentle.

This works particularly well if your other nails are all fairly short; it will stick out if you have nine long nails with one short.

So consider shorter nails until the missing one grows back.

The final option is perfect for women who are gearing up for a big life event and want to look their best: fingernail wraps.

Brides, in particular, will like this since it gives the appearance of a nail while being safer to use than acrylics.

Fingernail wraps come in many designs and colors, so you’re certain to find some that fit whatever style you’re going for.

They come in different materials, too. The cloth kind is likely to be the gentlest on your nail bed, so try to choose those over fiberglass.

They don’t last as long as fake nails, but they should make it through your big day just fine.

There are a lot of stunning nail wrap designs on Amazon to definitely check out.

How Do You Treat An Exposed Nail Bed?

Start by gently cleaning the nail and the surrounding area using warm water and soap. Use something that is gentle on delicate skin, such as baby soap. Spread the nail bed with a thin layer of petroleum jelly and/or antibiotic cream and bandage. Over the next three days, soak the appendage with the missing nail in a mixture of 1 tsp salt in 4 cups of warm water. Reapply petroleum jelly and antibiotic cream, and reapply bandage. Continue until the nail bed has become tough and isn’t sensitive anymore. Or wait until the nail has grown back. Watch for signs of infection, such as redness and swelling.

First off, don’t panic! Your nail might be temporarily gone, but it will, in almost every single instance, grow back just fine.

It might not be the prettiest sight in the world, but it will be okay in the end.

A little simple first aid and some TLC will have you on the path to recovery in no time at all.

Once the nail is gone, you’ll want to clean the bed. Do so very gently, as you’ll still be quite sensitive after your nail has come off.

Use warm water and very gentle soap. A soap used for babies or other kinds used for sensitive skin is perfect for this because it’s unlikely to cause irritation.

Don’t scrub too hard, and use an implement that is soft enough not to hurt. A cotton ball is a good choice. Carefully dry.

Spread the nail bed with a little petroleum jelly.

You can also use an antibiotic ointment, such as Neosporin if you think you might be prone to infection.

You can even use both!

In fact, many users report that Neosporin helps wounds to heal faster. And it’s very cheap from Amazon too! 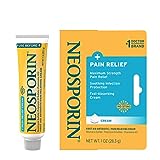 Just use a thin layer, over the entire area.

Bandage carefully, preferably with a nonstick bandage. But a good ol’-fashioned Band-Aid will work here, too.

Just avoid getting the adhesive on the exposed nail bed so early on, as it might be uncomfortable.

Change the bandage whenever it becomes soiled, wet, or loses its sticking power. Otherwise, change once a day.

For the next three days, three times a day, you’ll want to soak your finger in a saline solution.

It can be any temperature, but warm is the most soothing. Mix 1 tsp (teaspoon) of salt with 4 cups of warm water, and soak for about twenty minutes.

This will help prevent infection in a way that is much gentler than the application of alcohol, something that should be avoided.

You’ll want to continue this until the nail bed has stopped being so sensitive.

It will be quite clear when that is for you.

Want to be very safe? Continue bandaging until your nail has grown back. It might take some time, though, and is often unnecessary.

You could, but probably shouldn’t get acrylic on a missing fingernail.

It’s just not a good idea.

Instead, with a little bit of time, self-care and perhaps even a clever cover-up, you’ll let your nail heal naturally.

And once it is no longer exposed, painful and begins to harden; well then you can consider applying your favorite acrylics again.