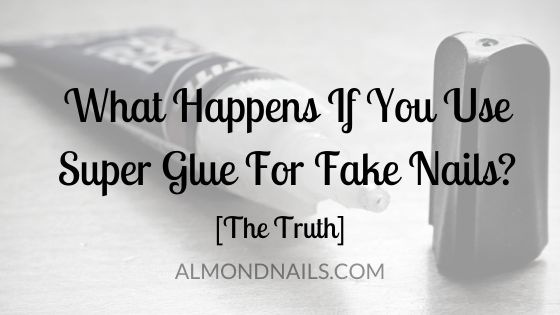 Sometimes, when a trip to the salon is out of the question, and you’re having to make do at home, you may find yourself short on nail supplies. If you’re wanting to jazz up your nails and you’re out of nail glue, what are you supposed to do, exactly? Here is what you should know.

So, what happens if you use super glue for fake nails? Superglue will allow you to adhere and wear fake nails but will come at a great cost to the health of your natural nails. Infection, serious nail damage, and even nail loss are all possible outcomes. Thus, it is strongly advised not to use superglue for fake nails, opting for nail glue or A DIY option.

Don’t just shrug and reach for the super glue.

There are many reasons why you shouldn’t just go with some Krazy glue, no matter what the internet tends to say.

It’s a bit much, and it does involve science.

But it can mean the difference between a pretty set of nails and nails that are damaged beyond repair.

Let’s find out precisely why!

Can You Use Super Glue To Put On Fake Nails?

While it is possible to use super glue to put on nails, it is strongly recommended that you do not. It can cause terrible damage to the nails themselves. In short, don’t use super glue on your nails.

Is it indeed technically possible to use super glue on nails- you can even find tutorials all over the internet, showing you the “best” ways to use it.

It’s supposed to be a remedy for everything, from broken nails to DIY nail glue.

You’ll sometimes even find trained nail artists arguing that it’s just fine to use, as long as you do so carefully.

That’s simply not the case.

One argument, that super glue and nail glue are technically the same, tends to win over many people.

And, on the surface, it does make sense.

If they’re both made of the same thing, then why does it matter which I use?

It should be like taking a generic grand medicine or buying off-brand food, right?

Except that it isn’t. At all.

In this case, we’re going to be looking at different “grades” of a substance.

This is what the product was designed and tested for use on.

For nail glue, it’s a product that was graded on being used on the human body.

This includes making sure that it didn’t trap moisture and produce greenish nails.

Glues of the grade are made for use on porous surfaces, such as your nails or skin, which your nail glue will almost certainly come in contact with at some point.

This is the same kind of glue used in threadless sutures, so you know that it’s a safe option.

But superglue isn’t graded in the same way.

Superglue tends to trap water, which can lead to your nails growing lots of unsightly fungi.

It’s also not normally intended to be used on porous surfaces, which is what your nails are made up as.

It gets worse the stronger that you go.

You might not be able to remove nails unless you soak with strong solvents, which will be rough on your skin and natural nails.

Even worse, there are stories of people who lost their entire real nail after using super glue.

Is There A Difference Between Nail Glue And Superglue?

The grades of glue are different, meaning that they’re designed for different things. Nail glue is designed to be used on the human body, while super glue isn’t.

It all comes down to what the product was designed for.

Not only can they be rough on your skin and nails, but they also tend to have a really strong smell, which can be overpowering for some people.

Since super glue fumes can cause literal brain damage if you”re around them too much, you should take a hard pass on that one!

Nail glue, however, is graded for use on the body.

The makers intend for it to be used on nails and to possibly get on skin occasionally.

Because of this, they tend to use products that are more akin to medical-grade glue, the kind used to give threadless stitches.

It’s a strong glue, but it’s perfectly designed to be used on nails.

We’ll include here a specific warning against using Gorilla Glue.

It’s actually a product that is stronger than normal super glue and often doesn’t allow moisture in or moisture out.

Soaking in solvents may or may not work.

There may be only one option left, and that’s a trip to the Emergency Room and removal of your nail.

As in, your actual nail.

It isn’t worth it.

Just wait until you can get some nail glue.

What Kind Of Glue Can You Use On Fake Nails?

You should only use nail glue to apply your nails.

Nail glue is the answer. Plain and simple. The only glue that you should use on your nails is nail glue.

When you remove a nail stuck on with superglue, you’re more likely to pull off the top layer of keratin along with it.

This will leave your nails brittle, weak, and visibly damaged.

You’ll be paying for that manicure for months and months, with nails that aren’t shiny or healthy anymore. Is it really worth it?

We really cannot stress enough how much you need to only use nail glue.

If you must find an alternative option to nail glue, then we have offered you some tips below.

They are all safe and, if done right, won’t hurt your nails.

What Can Be Used Instead Of Nail Glue?

If you’re out of nail glue, you can use double-sided tape, nail tabs, or clear polish.

So, if you’re out of glue and can’t use superglue, what are you supposed to use?

Luckily, there are a few at-home options that you can use.

None are going to last as long as using nail glue, but they won’t rip your nail off or give you a nasty case of green nail, either.

So, all-in-all, a better choice for most people.

You should have enough hold to last for a little while, so it’s a good option for events you can’t wait around for.

Otherwise, just hit up the drugstore for some nail glue.

The first option is to simply use double-sided tape. For a temporary option that will be gentle on your skin, use fashion tape since it’s designed to be used on and near delicate areas.

Before we begin, you’ll need to make sure that your nails are clean.

Give your hands a good wash, then run a cotton ball with nail polish remover over them, to be sure.

Then, get started by trimming the tape to fit your nails.

Remember, you want hold, but you don’t want it to be seen, either.

So make it as close a fit as possible.

All of your nails will be a different size, so do this one nail at a time.

Press the tape over the nail, being sure to avoid folds or bubbles.

If either happens, start over.

Finally, once it’s smoothly applied, pull away the tape’s backing.

Slowly, starting at your nail bed, press on your nail.

Best of all, no soaking to get them off later.

For a more secure hold, you should try nail tabs.

These sometimes come with your fake nails, or you can buy them separately.

Since they last about a week, they’re going to be a better choice for you than other home remedies.

However, if you have these, you probably already have nail glue at home.

Each brand has different ways of applying, so you should follow the instructions that you get.

The last DIY option for putting on fake nails involves something you already have at home if you’re into nail art: nail polish.

This is normally done with a base coat or similar, but in a pinch, you should be able to use any kind of nail polish.

The stickier, the better.

Keep in mind that the polish here isn’t designed to be seen, so choose carefully, depending on what you want your falsies to look like.

As always, start clean. Wash your hands, and use nail polish remover on your nails.

To begin applying your nails, turn your fake nail over so that you’re looking at the back.

Take your polish, and apply a rather thick layer over the entire portion that will be in contact with your natural nails.

It needs to be thick, but it shouldn’t ooze out from beneath the nail when you apply.

Once it becomes a little tacky, simply press it to your nail and hold for 15 to 30 seconds.

Afterward, let it dry fully, or at least another minute.

Don’t let it move around while it’s being held or drying.

Then, you’re done! Just repeat on other nails.

You can remove these nails with nail polish remover.

While technically you can use super glue to apply your fake nails, you really shouldn’t.

Sure this will enable you to get some excellent adhesion and get the look you wanted. But it comes at a cost.

That’s what you’re looking at here.

Besides, using superglue may even mean you lose a natural nail entirely.

And that’s a lot of pain. Not to mention the time and effort to get that natural nail to regrow back.

And that will mean no fake nails, gel nails, or even regular polish until it does.

And that is not a great look!

So, think about this from a long-term perspective.

If you do not have any nail glue lying around, order some from Amazon and wait to proceed.

Otherwise, use one of the DIY options listed above.

It will be worth it, trust me. 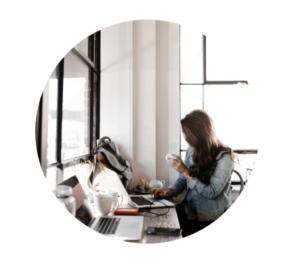 Jemma is a nail blogger and nail technician bringing readers the latest in nail art techniques, affordable nail trends and the latest collections from worldwide brands.

Jemma’s passion for nail designs, ideas, art and all things nails collided in 2015 when she started Almond Nails as a nail art journal. As her audience grew Jemma’s skills did too, and today Almond Nails is one of the top destinations for nails on the net.

“This eBook will show you exactly how to do your own acrylic nails from home. Even if you do not know where to start”.

I hope you love the products I recommend! Just so you know, I may collect a share of sales or other compensation from the links on this page. Almondnails.com is independently owned and the opinions expressed here are my own.

Almondnails.com is a participant in the Amazon Services LLC Associates Program, an affiliate advertising program designed to provide a means for sites to earn advertising fees by advertising and linking to Amazon.com. Almond Nails is compensated for referring traffic and business to these companies.