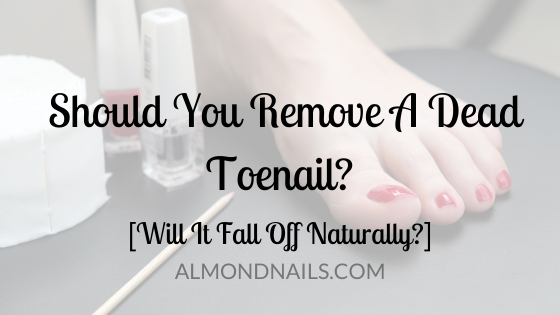 Dead toenails are awful, even at the best of times. So it’s only natural to want to remove them. But should you do so? Here is what you need to know.

Mid-winter during boot season might be an easier time to handle one, but that doesn’t mean that it’s enjoyable.

But during summer, when your feet will be on display? Dreadful!

They’re often unsightly, and there’s only really two ways to hide one: polish and a Bandaid, both of which are temporary solutions.

Because of that, it can be tempting just to rip that bad boy off.

No toenail can’t be more conspicuous than a dead one, right?

But don’t just do it spur-of-the-moment.

There are upsides and downsides to removing a dead toenail.

Let us now take a closer look at all that is involved here.

That way, you’ll be in a much better position and know exactly what to do (and when!)

We will start with the most common causes. Why; because you want to ensure that you do not cause future dead nails again!

There are four common causes of dead toenails, and one that’s uncommon, but should be looked out for. Shoes that don’t fit properly, fungal infections, trauma, and sports that are hard on your feet are the most common reasons for having a dead toenail. The last and most concerning is melanoma. So, if you’re not sure why your toenail is dead, head to a doctor to be safe.

Thankfully, most dead toenails are nothing too serious.

It’s normally a sign that you’ve been to hard on your feet and should give them a bit of a break.

But we’ll say it here so that it doesn’t get missed:

There is the chance, however slight it may be, that melanoma, a kind of cancer, can be the cause.

For anyone who doesn’t check any of the other boxes, a visit to a physician is in order.

It’s better to be safe than sorry when it comes to your health.

With that out of the way, there are the other four problems.

First, ask yourself what kind of shoes you wear.

Are they the pointy-toed variety, or just too tight in the toe because of fit? Then the pressure might be the cause of your dead nail.

Trauma is another normal way of killing nails.

Have you stubbed your toe recently or injured it in any other way, such as by dropping something on it?

That can cause what’s known as a subungual hematoma, or bleeding beneath the nail.

It’s what turns it that charming purple-black color.

Along the same lines, many sports that focus on feet can be hard on toes, causing what amounts to trauma damage.

Soccer can be bad for this, but the worst offender is undoubtedly ballet.

Anything that exerts a lot of force or pressure on the nail can cause damage to your toenails.

Lastly, there’s always the chance of a fungal infection.

The way to tell this apart from perhaps the dangerous melanoma is to examine your symptoms.

Is your nail dry and crumbly? Before it died, was it oddly-colored or thicker than it should be? Does it smell bad?

If so, you might have a simple nail fungus, which is easily treatable.

It’s a good idea to treat ASAP, so that it doesn’t spread and it won’t hurt future nails.

As always, if you’re unsure, head to a doctor.

How Do You Treat A Dead Toenail?

Start by removing any rough edges the nail might have with a file to prevent snagging. Make sure the nail bed is clean, and clean it again, for good measure. Use a Bandaid to cover the nail. If it’s partially attached, clip the unattached parts very carefully. Try your best not to remove it altogether but, if you must, do it appropriately. Always keep an eye out for any infections.

Treating a dead toenail is almost always the better option than removing it.

This is what you should probably start out attempting to do if it’s at all possible.

To keep things sanitary and the nail from accidentally being torn off, you should file away any sharp edges.

Do this carefully since you don’t want to pull it loose here.

Next, before you go any further, sanitize your nail bed. Soap and warm water are good, but alcohol, while unpleasant, can also be used.

Avoid hydrogen peroxide, as it tends to be harsh on delicate skin.

Worried? Do it twice.

Nail still partially attached, but with parts of it off?

Break out the nail clippers.

You’re going to want to only clip off the parts that aren’t attached to the skin anymore.

If you nick yourself, dab on some antibacterial cream.

Finally, cover with a Bandaid or other type of bandage. It should be snug but not tight.

Occasionally, it would be best if you let your nail breathe.

Will A Dead Toenail Fall Off On Its Own?

A dead toenail will eventually fall off on its own. Normally, this will result in a normal, pink, healthy nail that grows in its places. Sometimes, there is permanent damage. If you’re concerned, see a physician.

The good news is that your black nail isn’t permanent.

So you won’t be sporting the tenth-of-a-goth look for very long.

In most cases, you’ll regrow a new nail that is healthy.

Look for a pink, even nail. Don’t see that? You might have more damage than you thought, or the cause might be completely incorrect.

Sometimes, the causes of dead nails also cause damage to the nail bed or the nail matrix, or “memory” of the nail.

Tell a doctor about this at your next appointment, to be safe.

They can help you decide if it’s normal, fixable, or if it’s something that should be investigated further.

Remember: your nail’s appearance can say a lot about your overall health!

The bad news? You might be in for a bit of a wait.

How Long Does It Take For A Dead Toenail To Fall Off?

It can take as long as six months for a toenail to fall off and the new toenail to grow in. The time depends on your health, how fast your nails normally grow, and many other factors. Talk with your doctor if you’re concerned.

So, we’ll start with the bad news: it can take a long time for your toenail to grow back.

While fingernails can be back in as little as eight weeks, toenails are usually slower-growing.

So be prepared to be without a toenail for approximately half a year.

This can change, of course.

If you’re a person who has to clip their toenails daily to keep from having talons, you’ll probably have a healthy nail again sooner.

As always, supplements like biotin can’t hurt (if your doctor agrees), and there’s a chance they’ll help your new nail be healthier and stronger.

The wait won’t be easy, but it will be worth it.

Be careful if you try to use false toenails to cover it up.

Don’t use anything that could cause further damage to your nailbed, and do use products that are gentle on the skin.

Whatever you do, don’t glue a falsie directly to your nailbed!

That’s not a good idea and can cause real damage, both from the chemicals on your bare skin for long periods and the probability of accidentally tearing them off.

How To Remove a Dead Toenail

The best solution is to see a podiatrist. But, it can be done at home. Don’t attempt this if you have diabetes or other circulation issues. Be careful doing this, as you may make any damage you don’t know about worse. Always work clean. Treat the nail for a few days, at least. After that, pulling off the rest of the nail will hurt less. Or, you could wait for it to fall off on its own.

Seriously, if you have a condition, like diabetes, that can make blood circulation weak and make injuries more dangerous, don’t do this yourself.

It’s not worth the risk of infection. Head to a doctor. Suspect something bigger might be wrong? Same advice: go to your doctor.

You should start off by treating your dead nail for at least a few days, if not longer.

You can follow the instructions that we provided above for the best results.

Everyday, trim and file any bit of loose nail that you comfortably can.

Staying clean and avoiding infections is very important, so keep that in mind.

Once your nail is loosened enough, you should be able to pull it away with very little pain. If it hurts too much, that’s a sign you should stop!

Does A Dead Toenail Grow Back?

You’re almost guaranteed to have your nail grow back.

Even better, you’ll get it back healthy and good as new! If you’ve been worried about having a black nail for the rest of your life, this is probably a relief.

However, sometimes things can go wrong. Nails might not grow back the proper shape or color.

Rarely, they might not even grow back at all.

This might be a cause for concern, and a doctor’s visit is in order.

If you have a dead toenail perhaps the best thing you can do is identify the cause.

Besides, you do not want this to happen again.

While sometimes its out of your control, other times you may be inflicting it upon yourself by wearing the wrong shoes, for instance.

Either way, its best not to remove a dead toenail.

At the very least get a doctor and a podiatrist to take a look.

Other than this, you should look to treat the toenail and let it fall off when the time is right.

It should grow back, even if it does take up to 6 months!