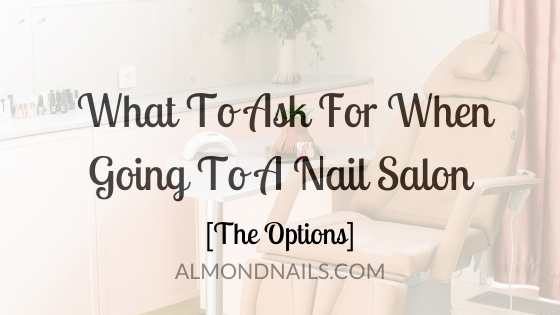 On your first trip, a visit to the nail salon might seem a daunting task. While others breeze through, it might seem downright confusing. It’s almost as though people are speaking an entirely different language. What do you even say?

So, what do you ask for when going to a nail salon? When going to a nail salon, you will need to ask for the type of nail manicure that you would like. Your options will likely be standard nail polish, Shellac, gel, acrylic, and dip powder. You will also need to select and ask for your desired color, and perhaps some optional extras such as nail art.

I know it’s not. At least at first.

What’s the difference between gel and acrylic nails? And which one is better? How long do they all last?

These are fair questions to ask.

But there’s no reason for you to worry: it isn’t that difficult to decode!

With a bit of planning, you can make sure that your first trip to the nail salon is a success.

Even better: you can make all future visits a success, too!

You’ll soon be asking for what you want, like a pro.

Let us now get into the details!

What Are The Options At A Nail Salon?

There are many options when you go to a salon. However, six, in particular, are the most common manicures: standard polish, Shellac, gel, acrylic, and dip powder. You may also be able to get a paraffin manicure, a treatment where your hands are dipped in wax, with any of them.

Let us now look into exactly what which one is and what to expect from it – including durability, the time the manicure takes to do, and cost of treatment.

The first of your manicure options is the one you’re probably most familiar with: basic polish.

This is the same thing that you have likely been putting on since you were a child.

In this case, however, you can count on a truly stunning job.

You’ll also have someone who knows their stuff doing the application, making it often neater and prettier than you would get with a home job.

And there’s no problem with doing your non-dominant hand, which many people love.

On top of that, you’ll likely get a hand massage, which is always a nice touch.

The average time of application is about half an hour.

This is usually the least expensive option at a salon, normally not costing more than $15.

It’s not particularly hard on your nails, and can be taken off at home with no problems – just grab a standard bottle of nail polish remover.

However, it’s also the shortest-lasting option on the list.

You’ll have about five days of no chips before you need a touch-up, and that’s if you’re careful and lucky.

Shellac sounds like something you’d have done to your car, but it’s actually a fairly common manicure option.

In fact, most of the time when people ask for “gel” manicures, they’re really getting Shellac!

It’s applied much in the same way that gel is, and there’s a reason for that: you can view Shellac as a combination of gel and traditional polish!

Starting out being brushed on, the Shellac is then cured under UV lights, leaving it sturdy and less likely to chip.

In fact, you can look forward to two to three weeks without chipping, making it a great choice for anyone not looking for a weekly touch-up.

It’s not quite as hard like gel, making it easier to soak off at home with some acetone and a few other DIY tricks.

There is some risk of breakage if you go that route, though, so it might be better for newbies to head back to the salon.

You can expect to pay somewhere between $25 and $40 for an application, which will take about an hour.

Gel nails are one of the most commonly asked-for manicures. And, if you’re looking to build the shape of your nail or use falsies, this is something for you to consider.

Gel nails are a lot like Shellac, mentioned above.

The major difference is that they can be built upon and lengthened, giving you truly stunning nails, even if your natural nails leave a lot to be desired.

Want to get fake nails anyway? A gel manicure can be applied over them!

The application is similar to both Shellac and acrylic.

Curing under UV light is needed to cure the gel; otherwise, it won’t harden properly.

The application process normally takes 45 minutes, all the way up to an hour, and costs anywhere from $25 to $60 or even more.

Again, similar to Shellac, you can expect two or three weeks of wear before the manicure begins to chip.

You can get fills done to lengthen the lifespan of your gels.

If you’ve never been to a salon before but expect more than basic polish, this is probably the manicure you have in mind.

Acrylic nails are the original, what your mom and grandma wore before you.

And there’s a reason for that: they look good and wear long.

You can even take them off at home, with a little practice (and a lot of care)!

Acrylic is actually a combination of two things: a liquid and a powder.

It sets into a hard layer that protects your nail and any false tips that you’ve asked for.

That isn’t the end of your manicure, however: that layer is clear, and not too pretty to look at.

You’ll have to get some polish, and possibly other nail art, applied before you’re ready to hit the streets with your new look.

The variations to choose from are as numerous as nail artists are, and salons often have a lot of options for you.

The entire process should take approximately an hour and a half, costing $35.

You’ll get two to three weeks without chipping. A fill will take about 45 minutes and cost about $15 but will extend the life of your manicure.

Dip nails are the new, trendy choice when it comes to manicures.

You’ll find no bottles of polish or UV lights here.

Instead, a few base coats (each is different here) will be applied, and then you’ll dip your entire finger into the powder.

Everything is then finished off with a sealant.

The trick here is that the powder, which provides your nail color, only sticks to the sealant.

So you don’t need to worry about messy polishes or cuticles!

This manicure can last up to a month without chips and costs about $40-$50.

They can be taken off at home similarly to acrylic or gel nails.

If you’re not already accustomed to the process, it’s probably better to head back to the salon.

A warning about dip nails: while beautiful, they’re more flexible and, because of that, more fragile.

Be gentle on them, or they won’t last very long!

The last option isn’t really a nail treatment, but something for your hands.

A paraffin manicure can be done on top of any other type of manicure.

You’ll have your hands dipped into warm wax – normally paraffin, as the name suggests, or possibly beeswax – and placed into gloves for it to slowly harden.

Sometimes, fragrances or essential oils will be added to the wax.

After the wax is hardened, it is peeled off. Beneath, you’ll find that your hands are softer and more refreshed than ever before!

This can cost up to $40 on top of the price of any other kind of manicure, and will add up to an hour to the time spent at the salon.

So, maybe not the choice on your lunch break.

For a relaxing spa-day at your local salon, though?

You’ll thank yourself for it.

How Do You Say What You Want In A Nail Salon?

Try to start off knowing what kind of manicure you want, and check what they offer. Be sure that they use the standard names for different manicures. If you’re confused or uncertain, know what you’re looking for in a manicure, and state that instead.

The easiest way to say what you want is to ask for it.

Most salons use the traditional names for manicures.

Even if they don’t, most will understand what you mean by it.

Take a look at what they offer, and ask questions if you’re unsure.

Most businesses are happy to describe what it is in detail.

Then, compare it to the list above to see if it’s the type of manicure you want.

Still not sure what they call it? Describe the process itself!

Certain manicures, such as dip nails, are impossible to confuse with something else.

It might also clue the salon worker in on what you’re asking for. Google’s excellent here since you won’t have to rely on just your memory!

Are you having trouble recalling the name of the manicure that you’re hoping for?

Instead, give the salon worker the reason that you want that particular manicure.

Is it long-lasting? Is it easy on your nails? Is it quick, or is it cheap?

Even if you don’t find the exact treatment you’re looking for, you’ll get something that ticks your boxes anyway.

What Should I Know Before Going To A Nail Salon?

Before going to a salon, you should know what you want from your manicure and be familiar with what the salon offers. At the same time, you should research into a salon, check reviews and ensure they provide a good service.

And remember, hygiene is key.

If a place looks unsanitary, it probably is. Run!

Trust your instincts; they try to protect you.

Cleanliness is your top concern.

It may seem silly, but people have nearly lost limbs after getting infections at salons.

So look for a place that takes hygiene seriously.

A good rule of thumb is to see if they’ll use tools that you bring in and if they’ll let you take a file home with you.

If they won’t, find somewhere else.

You should also find somewhere else to go if you see them using razor blades to remove cuticles.

This practice is flat-out illegal in many places, and there’s a reason for that: it’s dangerous!

You can face lifelong problems afterward, and there’s simply no way to do it safely.

If you see it being done, even legally, move on.

The last thing is something that you can do to keep yourself safe.

Do not shave in the days leading up to your appointment.

Waxing is out, too. That’s because doing so increases your infection risk.

Even the cleanest of salons will have some germs hanging around, so it’s best to take every precaution available!

The biggest thing to know: trust your instincts.

If something about the salon makes you nervous or feels off, take your gut at its word. There’s always another salon. 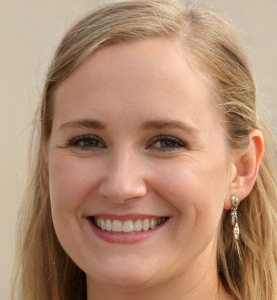