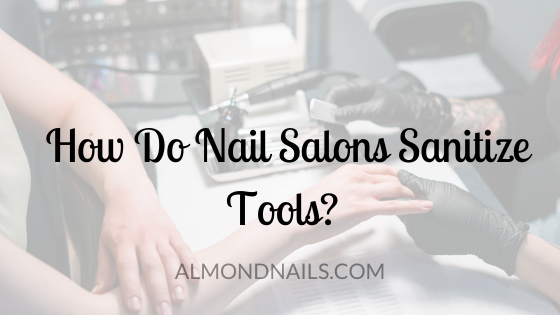 When it comes to nail salons, cleanliness should be a top priority. No matter how beautiful the results are, if the salon isn’t following a rigorous hygiene standard, it’s a place you don’t want to risk going to. Between possible infections (even amputations – yikes!) and the general “gross” factor that comes from a negligent salon, there are many reasons you should avoid them. But how are nail salons actually cleaned?

So, how do nail salons sanitize tools? There are different methods to sanitize tools, but a few are widely used by salons. Autoclaving of instruments is the best, as it kills all organisms using heat and pressure. Some salons also use chemicals, such as Barbicide, to keep certain things clean. UV light boxes are sometimes used for sanitizing.

And anything that can’t be completely sanitized, including emery boards, must be thrown away.

And with whatever method a salon decides to follow, all of them should follow a rigorous standard.

This way, clients should and their nails should remain safe as possible both in, and following a visit to the salon.

Let us now explore salon sanitization in further detail. This way you can be much more confident in the process!

What’s The Difference Between “Cleaned” and “Disinfected”?

It might seem like a distinction without difference, but there actually is a difference between cleaning and disinfecting.

And, when it comes to nail salons, that difference is a pretty wide gulf that shouldn’t be ignored.

Cleaning in a salon refers to surface cleaning.

It means getting rid of messes that you can see, such as visible dirt, nail polish, or other grime.

This is normally done in a way that most people would recognize:  Washing.

This can be done in a sink, or a similar manner. But salons should never stop here!

Disinfecting is what actually cleans the tool.

It’s a method of killing most or all of the germs and other microscopic baddies that can cause infections.

Since they can’t be readily seen, even a visibly-clean tool should be thoroughly disinfected before it’s used on another person.

When Do Nail Salons Sanitize Tools?

Nail salons sanitize tools that can be shared between customers. This is normally done as soon as possible. They also clean regularly enough that the salon should appear completely clean. The chances of microorganisms being shared should be minimal.

If a salon is cleaned appropriately, you can count on one thing:  They’ll spend a lot of time sterilizing their tools.

While many of the tools that they use are designed to be single-use (including nail files, in many instances), there are just some things that must be reused.

And, to be reused, that tool must be completely sterilized.

Salons should always use a clean set of tools for every customer.

This means that, as soon as possible, a used tool must be thoroughly cleaned and sanitized before going back into rotation.

If there happens to be a larger stockpile of supplies, then time between cleanings might be longer.

However, it’s always better to clean immediately, rather than put it off.

It makes the salon a more sanitized, healthy place for the people getting their nails done.

Absolutely no one should be reusing tools that have not been sanitized completely, according to regulations.

It isn’t just the tools that need to be cleaned, of course.

The salon itself has to be cleaned and sanitized.

A good business will look completely free of dirt, trash, and other messes, from the front door to the back room.

That’s because cleaning should be done throughout the day, to ensure that no dirt or microorganisms can make its way onto the (hopefully sanitized) tools.

Exactly how often this cleaning should be done is relative, but it should absolutely be done often enough to keep the salon spotless.

A general rule to follow is that the salon should be taking steps to make sure that no one else’s germs make it to the next customer.

How Often Do Nail Salons Sanitize Their Tools?

Nail salons are required to sanitize reusable tools between every customer. Some tools must be thrown away after one use.

The right answer to this question is, unfortunately, not necessarily a number.

When it comes to how often a salon should sanitize their tools, it’s always going to be subjective.

A large, busy salon will require more frequent sanitizing than one that is small and infrequently used.

Some tools simply can’t be sanitized, either.

At least, not in any safe, meaningful way.

This includes things such as emery files and pumice stones.

Some tools that can be sanitized to some degree, might be better of being thrown away.

Wooden cuticle sticks, for example, are often thrown away after use, rather than reused, despite that being a possibility.

For porous tools, it’s normally the better option to toss them than try to reuse them.

For tools that are capable of being sanitized, the process should be done after every customer, and before the next one.

Not giving the germs and bacteria time to grow and thrive before being cleaned is a great way to keep things spic and span, but full disinfection can sometimes wait a while.

The biggest takeaway is that no two customers should ever have the same tool used on them without it being cleaned first.

It’s an infection waiting to happen and should be avoided at all costs.

If something isn’t cleaned right away, then it should be safely stored away where it can’t contaminate other tools or surfaces.

Wrapped in a plastic bag, and out of sight. It definitely shouldn’t be sitting in the sink!

What Do Nail Salons Use To Sanitize Their Tools?

Autoclave, a method that completely cleans a tool with pressure and heat, is the best choice for cleaning tools. Many salons will also use chemicals, including bleach, Barbicide, and hospital disinfectants. Some salons use UV light to sanitize certain things.

What salons use to sanitize tools is largely dependent on a few things.

This includes the type of tool, how much the salon throws away, and the state regulations on salon cleanliness.

Autoclave is the only method guaranteed to kill all germs, microorganisms, and bacteria.

This is done by using both high-pressure and high-heat to sterilize the tools.

If you want something so clean it could be sent to the International Space Station, this is the choice for you!

The only problem is that it’s a difficult process to go through, and can be rather expensive.

Therefore, cheaper salons aren’t likely to use this method as often as more pricey ones.

As for state regulations, only Texas and Iowa require tools to be autoclaved before being reused.

The next option isn’t as good as autoclave, but it’s still a solid way to keep tools clean: chemical cleaning agents.

This includes bleach (which should always be diluted before use), as well as Barbicide (the liquid combs are often stored in at hair salons) and hospital disinfectants.

Different products have different uses, and, again, it all varies by state. The stronger the disinfectant, the cleaner the surface or tool.

So don’t be put off if your salon smells like a hospital – it’s a good thing!

Some salons use either boxes or wands that produce this type of light as a sterilization method.

It’s probably the least-sure option available. It should be avoided as a main method of sanitizing.

How To Sterilize Tools In A Salon

First, the tool must be thoroughly cleaned before sanitizing. Be sure that all visible dirt, grime, and other materials are gone. Then, you can go about sanitizing it in your preferred method. All mixed disinfectants must be used within 24 hours. UV lights shouldn’t be used as chemical replacements.

So, now that you know that everything about cleaning a salon is subjective, you’ll probably see this coming: exactly how to sanitize should a salon proceed with sanitizing their tools.

Well, this is a process dependent on a lot of other things.

This includes methods of sanitizing, what you’re cleaning, and the state’s regulations on the matter.

However, we can still give you a basic idea of what to do.

Step one is to make sure that the tool is thoroughly cleaned before you begin trying to sanitize it.

This means making sure that it’s clean visibly, rather than at the microscopic level.

You’ll want to make sure that there are is no visible dirt, grime, or other messes on the tool itself.

This is an important step, and should not be skipped.

Next comes the disinfecting.

If you’re doing it via autoclave, then congrats:  you probably have instructions to follow on-hand!

It’s best to follow instructions for specific equipment, so that you end up with a tool that’s been properly sanitized.

In fact, in the United States, to do otherwise is often a crime!

Make sure that anything that you mix is either used up or thrown away within 24 hours of mixing.

The longer it stands, the less potent it gets.

And remember:  UV light is not a substitute for chemical disinfectants!

Nail salons use a range of different methods to sanitize their tools.

And they have to; not only to ensure the safety of their clients but to meet strict regulations too.

This is why it is so essential to only visit reputable, regularly visited salons.

Besides, nothing is worse than an infection.

And sterilization is perhaps the standout defense against it!